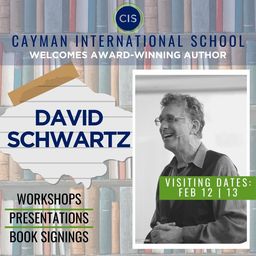 Author Visit: David M. Schwartz
Share to FacebookShare to TwitterShare to LinkedInShare to PinterestShare to EmailPrint this page

Last week, CIS welcomed math and science author David M. Schwartz to our campus. An author of about 50 books for children, Mr. Schwartz has traveled to a variety of different countries to talk to audiences of all ages about math, science, reading, and writing.

Elementary, Middle School, and High School students met Mr. Schwartz during four separate assemblies last Wednesday and Thursday. Students from Kindergarten to grade 5 explored Mr. Schwartz's science book Where in the Wild? and the ten creatures revealed through clues in poems and camouflage in photos. In G is for Googol, students learned about the number Googol (not Google!) which is the number 1 followed by 100 zeroes. We also discovered how much a million really is by counting popcorn with Mr. Schwartz, based on this book Beyond a Million where a professor shows how to count through the powers of ten. Students were amazing at seeing how much one million pieces of popcorn looks like! Special thanks to our CIS parent volunteers, Erika, Susan, and Elissa for popping those kernels for us!

Middle and High School students learned about how Mr. Schwartz has been a contributing writer for the Smithsonian magazine over the last 20 years. In his presentation, they compared nonfiction language in Wikipedia to one of Mr. Schwartz's magazine articles, discovering how much word choice matters in keeping your nonfiction lively. Mr. Schwartz also showed students how to make their nonfiction come alive by using techniques like voice and vivid language, using pictures and sounds that he'd gathered during a research trip to Africa in order to help students write their own nonfiction passage.

On Mr. Schwartz's second day at CIS, Grade 2 to 4 students participated in additional sessions with the author. Students learned about the Fibonacci sequence and how to see this pattern of numbers in nature. Mr. Schwartz also talked about other math and science concepts like counting the lines of symmetry in a sea star and some animals' incredible olfactory senses, the latter equating to humans being able to smell from CIS to Public Beach!

In between sessions, Mr. Schwartz was thrilled to personally autograph books bought by families. Everyone who ordered should have received their books, except for a few which will be shipped to CIS over the next couple of weeks.

David Schwartz was amazed and touched by the warm welcome, kindness, and respect he received from the CIS community. At the end of his two successful days here, students presented Mr. Schwartz a beautiful book of Cayman art to remind him of our gratitude for such an impactful visit. For some highlights of our wonderful author visit, please visit our photo gallery!