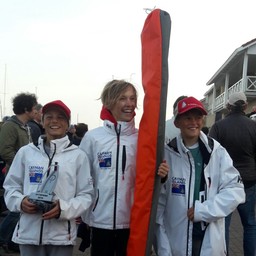 Matheo, grade 8 student, captured his first podium finish at a European event, placing 3rd overall among the 215 entries in the championship fleet.  Matheo won 2 of the 5 races staged over two days, this marking his first win outside of North America.  The young sailor raced confidently, buoyed by a breakthrough performance in Lake Garda the week prior, where he finished 67th out of 1061 sailors in the championship fleet.   The regatta set a new record for the largest single-class regatta in the world, making the 3 Cayman sailors world record holders.

George and Jaspar also sailed impressively, with George finishing just one spot out of the top 100 in Port Zelande and Jaspar impressing his coaches with aggressive racing in his very first regatta outside of North America.

The three, who will be joined by teammate, James C., are very much on track for impressive results at the North American Championships set for Puerto Vallarta, Mexico at the end of June.  This will mark the first time Cayman has sent a full team of 4 to the high caliber continental championships. Matheo and George are also set to compete at the World Championships in Cyprus at the end of the summer.

You can watch with the team compete against international sailors right here at home as part of the Youth Sailing Extravaganza week, May 15th to 21st.