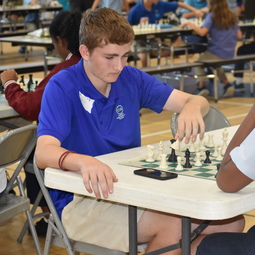 This past Wednesday CIS hosted the Inaugural Cayman Islands Interschool Chess Tournament in the ARC. Over 120 students from 8 island schools sent their best players to compete with one another for medals and awards. Sponsored by Dart's Minds Inspired under the direction of Glenda McTaggart, the tournament took place in three divisions - primary, middle and high school - in a competition that lasted four hours.

The Primary School Division was won by Luc S. of the Cayman Islands Chess Club, the Middle School Division by Ryan H. of Cayman International School, and the High School Division by Edmund P. of Clifton Hunter. Congratulations to runners-up Arjun D. of St. Ignatius, and Alexander G. and Tyler D. of Cayman Prep and High School. Also competing in the Medal Round were Kiernan F. and Ricardo D. of St. Ignatius, Laia S. and Lennox T.W. of CIS, Daniel S. of Triple C, and Khobika R.K. of Cayman Academy. The Honourable Ms. Barbara Conolly, the Minister of Education, was present to hand out the medals and awards.

Mr. Wise would like to extend a special thanks to the senior students of CIS who once again demonstrated their commitment to connecting, inspiring and serving the larger Cayman Islands community. Without their enthusiastic, loyal, and capable help, this tournament could not have taken place.