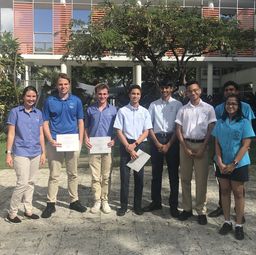 During the conference, students had the opportunity to participate in either a UN General Assembly simulation, an International Press Delegation simulation or, in a bit of a change from the norm, a Cayman Islands Legislative Assembly simulation. The LA simulation discussed development in Cayman, looking at the Port, Barker's, and transportation issues; then moved on to discuss educational needs in Cayman and how to ensure access to quality education for all of Cayman's youth. In the General Assembly, students spent the morning tackling the issue of child protection from human trafficking, and then moved on to also look at access to quality education in the afternoon. Students in both committees spoke passionately about their topics and worked with students from CIS and the other participating schools to reach solutions to these problems.  We were particularly impressed with some of the ideas students had to resolve local issues, and it is clear how much they care about their local environment and the impact of recent and proposed changes on island. Throughout the day we also had 3 CIS students working as journalists representing different news outlets who reported on the events in both committees in almost real time.

All of our students worked really hard, and it was great to see so many new participants on the CIS team. We also had 3 students win awards at this year's conference which was excellent!  Arielle F in Grade 11 won Best Newcomer in the Cayman Legislative Assembly, and Pierre-Louis S and Luke S, also both Grade 11, won the Delegates' Choice Award in the UN General Assembly.