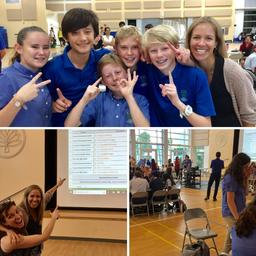 On Wednesday CIS hosted the third annual Scrabble Scrum Tournament in the ARC. There were nine teams representing their three schools with enthusiasm and determination. Instead of the traditional Scrabble game, Scrabble Scrum requires teams to work together to maximize their word count by filling the board with as many words as they can in the time allowed. Unused tiles count against the score, and bonus points are given for words seven letters long or longer. A starting word which must touch the center tile is given by the chief judge and three rounds are typically played to determine the best team.

CIS has done well in this event in the past, winning the first year and coming a close second last year. This year CIS put up four teams from Grade 7 to Grade 10 and to everyone's surprise the winners were Ms. Lee-Anne's Grade 7 class, "George's Minions," who narrowly beat out the Grade 9/10 team from CIS, the "Phlaming Phlamingos." The two CIS teams were closely followed in third by the "Scrabble Monsters" from St. Ignatius, who won last year.

Thanks go to Mr. Wise and Ms. Lee-Anne for coaching their respective teams, and special thanks to Ms. Krista, who coached and organized the event at CIS. This event would not have been possible without the active participation of the Rotary Clubs of Cayman Island who provided the boards and the judges, and Foster's Food Market who provided the water and the snacks. Thanks also to Mr. Sean, Mr. Alfredo, and Mr. Ronnie who set up the tables for the games and snacks and Mr. Fabio who set up the projector, so all could see the scores.

Congratulations to the winning team of George Z., Connor M., Tabitha H., Edmund D., Chad M. and their coach Ms. Lee-Anne. We look forward to your continued success in the years to come.